Review: Edna St. Vincent Millay, There Are No Islands, Any More: Lines Written in Passion and in Deep Concern for England, France, and My Own Country. New York: Harper & Brothers, 1940; 12 pages, hardcover 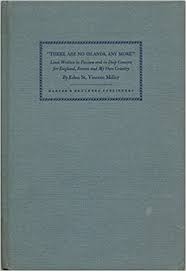 In 1940, American poet and Pulitzer–Prize winner Edna St. Vincent Millay wrote a twenty-one-stanza epistolary poem called “There Are No Islands, Any More,” which begins with this couplet: “Dear Isolationist, you are / So very, very insular!”

It was first published in the New York Times and other papers on June 14, 1940, at a time when Nazi Germany had already invaded Poland, Denmark, and Norway, and was amassing troops on the French border. Millay, in her poem, appeals to the American people to avoid the mistake of standing by idly as Europe is ground under the heel of the Nazis. A large percentage of Americans were opposed to any involvement in the war, a sentiment that crystalized in the America First movement, which was founded later that year.

Millay, who had been a pacifist during the First World War, was now arguing that isolation was no longer possible in a world that was so closely interconnected, and that the threat that Germany posed to France and England was as much a threat to the United States. As she repeats in the poem’s refrain, “The tidal wave devours the shore: / There are no islands any more.”

The poem was published in a hardcover, handset chapbook edition by Harper & Brothers shortly after it appeared in the newspapers, and Millay specified that all profits were to be given to a war-relief agency.

Millay’s message of “There are no islands any more” is as relevant today as it was eighty years ago, especially now that we are confronted nationally with another America First movement just as isolationist and just as pernicious. Good poets are prophetic, and their words tend to become more relevant with each passing year.

find copies of the first edition of this book at Amazon:

There Are No Islands, Any More